Already 2 weeks down in 2014 – be strong and stick to those resolutions! Here’s what our speakers have been up to thus far in the new year.

In the Memphis Flyer, Susan Douglas publishes a scathing condemnation of right-wing political spending.  “Among the many visionary goals of our nation’s right wing — impoverish older people, starve the poor, deny climate change, outlaw abortion and contraception, eliminate health care for millions — few are more foundational than defunding education in general, and higher education in particular.”

Houghton Mifflin named Daisy Hernández’ Before Love, Memory a notable essay of 2013.  Read her piece at Culturestrike about volunteering at a facility in South Florida for undocumented children separated from their families.

In response to the epidemic of concussions and degenerative brain disease among NFL players, Dr. Ainissa Ramirez and her co-author of Newton’s Football: the Science Behind America’s Game, propose a ban on helmets.  “Hear us out.”

The battles and victories of Dr. Sandra Steingraber and her fellow fracktivists make Alternet’s list of 2013’s top progressive milestones.

Countercurrents sits down with Annie Leonard and hears her Story of Stuff journey, from the overwhelmingly positive response following its release to the death threats later on after Glenn Beck targeted her film with his vitriol.

Dr. Stephanie Coontz at CNN talks about the Legacy of Lyndon B. Johnson’s War on Poverty, and how we got to where we are now.  “The resurgence of poverty is not because government programs have ‘gotten in the way’ but because they have not done enough to get in the way of market forces going in the wrong direction.”

Comic Kate Clinton writes about intransigence during the holidaze in PTown, which is a snoozy place to be in the winter when the sun sets at 4PM.  She resolves, “with a bit of free time on my hands, I will think about changes I can make in my daily life to change the realities — poverty, hunger, homelessness, religious homophobia, transphobia, violence — for LGBT people in 2014.”

On Good Morning America, Justin Klosky creates order out of one family’s chaos.   Get Klosky’s tips for getting your own life in order!

Anticipating his appearance, the Santa Barbara Independent talks to Richard Rodriguez about his new book Darling, which centralizes women in its understanding of monotheistic desert religions.  “Male friends of mine are increasingly becoming atheists; they’re sarcastic, bitter, and angry toward organized religion. Many of the women I know are reconstructing religion.”

Dr. Neil deGrasse Tyson makes the cover of Parade Magazine!  While having fun on his photo shoot, he also expresses his hopes that Cosmos’ prime time launch will land on fertile terrain.  Watch a preview of his appearance on Bill Moyers!

After the scandals in the news about bullying and anti-gay sentiment in the Miami Dolphins, Philadelphia Eagles, and Minnesota Vikings, Sporting News checks in with Wade Davis to get a more nuanced take on NFL culture.  “We sometimes talk about sports in a narrow, constricted way, but people keep playing because of the camaraderie.” 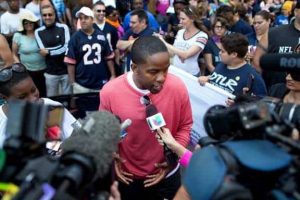