Reproductive Rights attorney and author Kathryn Kolbert lectures at colleges and universities across the nation and is a frequent commentator on constitutional and women’s rights issues in the national media. She is co-author of Controlling Women: What We Must Do Now to Save Reproductive Freedom

A public-interest attorney, journalist, and entrepreneurial  leader, Kolbert has been recognized by The National Law Journal as one of the “100 Most Influential Lawyers in America.” In 1992, Kolbert made her second appearance before the U.S. Supreme Court, arguing Planned Parenthood v. Casey.  This landmark case has been widely credited with saving Roe v. Wade with what has called “one of the most audacious litigation strategies in Supreme Court history.” 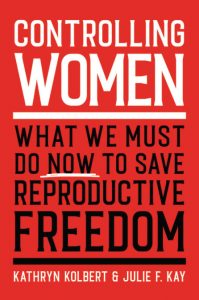 “A knowledgeable, essential reframing of an incendiary issue based on common sense, historical fact, and simple decency.”