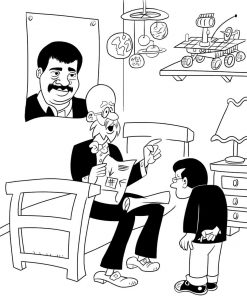 National Book Award winning author Charles Johnson, in collaboration with his daughter, has released the first in a series of children’s science books aimed at 3rd-5th graders, which is distinct in featuring African Americans as main characters.  Illustrated by Charles Johnson himself, the Adventures of Emery Jones: Boy Wonder explores what it’s like to be a Black American genius and scientific whiz kid.  Says science fiction writer Steven Barnes, “A time-traveling lark written with energy and illustrated with terrific, deceptive simplicity, this hysterically funny story of young genius has serious things to say about friendship, bullying, identity and the power of imagination.”  Notice the poster on the wall?

Books we’re still looking forward to: crime reporter Jon Leiberman’s new book will be out in February.  Whitey on Trial: Secrets, Corruption, and the Search for Truth is now available for pre-order on amazon.  Meanwhile Professor Hassan Abbas, expert on South and Central Asia, expects The Taliban Revival: Violence and Extremism on the Pakistan-Afghanistan Frontier out on Yale Press in May.

Richard Rodriguez talks more about his new book Darling: A Spiritual Autobiography, which engages with the desert god of the world’s three major monotheistic religions, and the ecology which inspired it.  He gives his interviewer this injunction:  “You have to go to Las Vegas. If you really love nature, you have to go there to see how frightened we are of nature; it’s one of the reasons we light up the night in Las Vegas. Nature is no easy thing to live with.”

Law professor Spencer Overton, on the Huffington Post front page, reports back from the Supreme Court hearings on campaign contribution limits.  “When a $2500 donor becomes unreasonable, it is relatively easy for a fundraiser to push back. By raising money from lots of different sources, it is not hard to resist one of hundreds of donors who are giving $2500 … Pushing back on a $2.95 million contributor, however, would be much more difficult.”  Hear him on NPR talking about the racial implications of the Department of Justice’s lawsuit against North Carolina’s voting laws.

Elsewhere on NPR, Dr. Ainissa Ramirez follows up on her Forbes piece, “Why You Should Care About the God Particle.  And, Sadly, Why You Don’t,” decrying the science community’s failure to communicate the importance of its discovery to the public.  “A few thousand scientists … are losing their minds … crying and hugging each other.  The rest of society is trying to figure out why this is a big whoop … I think the nerds got it wrong by not inviting everyone to the party.”  Noting the cost of the Large Hadron Collider, upward of $10 billion, she entreats, “Let’s spend just a little bit of that money educating people.”  NPR invited her back on the air yesterday, this time talking about her new book Newton’s Football: The Science Behind America’s Game.

Jessica Valenti at the Nation covers the dark story of a 16 year old ward of the state being forced by Nebraska’s Supreme Court to carry a pregnancy to birth against her will.  “There is no logic here, just fear. Fear of young women’s bodies, young women’s sexuality, and young women’s autonomy.”

“We can’t prevent another malign bug from entering the human population. But will it kill a few thousand people, or tens of millions?” asks David Quammen at New York Times in the vein of his book Spillover: Animal Infections and the Next Human Pandemic, elaborating what can and cannot be done when the next zoonotic virus comes along.

The Marin Independent Journal tells the ongoing story of Stacy Malkan and her colleagues at the Campaign for Safe Cosmetics, detailing how cosmetics are safer now than when the women began their work in 2004, “but until the last skin whitener doesn’t have mercury in it, until the last lipstick has no lead, we’re not done.” 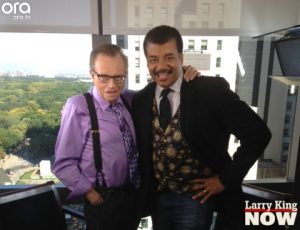 Video: PC Mag catches up with Dr. Tyson at the New York Comic Con, where he talks about the 21st century prime-time reboot of Cosmos.  Asked about the government shutdown, he blames the electorate.  Asked about its impact on NASA, he observes, “NASA, from the numbers I saw, was hit harder than almost any other agency. Which tells me that the government thinks that NASA is expendable when the budget numbers don’t match.”  And to wrap things up, here’s the good Doctor with Larry King.