At Counter Currents, Annie Leonard writes about the message of her latest video, the new internet hit Story of Solutions.  “Changing the goal of the entire economy—from more to better—is a huge task. We can’t do it all at once. But by focusing on game-changing solutions, we can steadily build an economy that values things like safer, healthier and more fair as much as we currently value faster, cheaper, and newer.”

The London Evening Standard and The Daily Californian review The Punk Singer, the new documentary about Kathleen Hanna.  From the latter: “Chronicling her musical projects from Bikini Kill to the Julie Ruin, The Punk Singer also explores how Hanna persuaded an irritated boys’ club to admit that women are worthy of respect by convincing women they had a right to admission.”

Jessica Valenti joins the Board of Directors at NARAL Pro-Choice America.  Writing at the Nation, she reminds the readership that in the past she has both blogged for and been critical of the organization, and looks forward to working transparently under its new leadership and galvanizing the support of young people.

NPR covers Richard Rodriguez’ latest book Darling, an exploration of monotheistic desert religions in the aftermath of 9/11.  “It was in the weeks following the terrorist attacks of September 11 that I came to the realization that the God I worship is a desert God,” he writes in the first chapter. “It was to the same desert God the terrorists prayed.”

Dr. Neil deGrasse Tyson goes to the movies!  His critical observations of the science fiction film Gravity, made incarnate in the form of 12 tweets, provoked delight and irritation throughout the internet, and are reproduced in full at the Atlantic Wire.  Earlier, in the week, while Bill Nye didn’t get the Mirror Ball Trophy at Dancing With the Stars, astrophysicist Neil deGrasse Tyson was there in support. 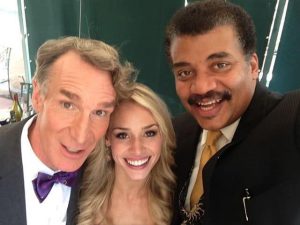 At the New York Times, math professor Steven Strogatz guides you through the math that might begin to explain why seven staffers of the Jodi Solomon Speakers Bureau have been known to share three birthdays.  Picked up by Buzzfeed’s own interpretation of the “Birthday Problem.”