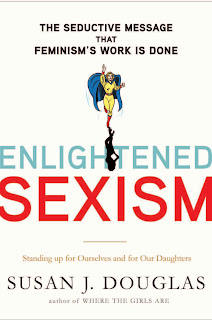 Starting with Beverly Hills 90210, Melrose Place and Ally McBeal in the 1990s and ending with Gossip Girl, Grey’s Anatomy and the 2008 presidential race, Enlightened Sexism chronicles the widening gap between the images of women in the mass media and the everyday lives of girls and women in the United States.

And it argues that in the face of stalled progress for full gender equality in the U.S., the mass media have, inadvertently or not, sought to seduce women and girls with pop culture fantasies that true female power has been achieved or that it comes from being bust, thin and beautiful.
Combining extensive research, hours of viewing, and a humorous, at times sardonic tone, the book argues that girls and women have come to be pulled between two warring trends in the media: embedded feminism, which takes the achievements of the women’s movement for granted and represents women in positions of power, and enlightened sexism, which resurrects retrograde stereotypes of girls and women as bimbos, shopaholics, and obsessed primarily with men and babies.
Embedded feminism, which has produced countless images of women as DAs, police investigators, judges, police chiefs, surgeons and doctors, lawyers, forensic scientists, and television news anchors, pundits and reporters, ironically over-represents women’s career achievements, as most women remain employed as secretaries, nurses, elementary school teachers and hairdressers.
Enlightened sexism assumes that full equality for women and girls has been achieved and insists that, as a result, sexist depictions are fine, even fun, because they don’t matter anymore.
So both embedded feminism and enlightened sexism, despite their diametrically opposed agendas, advance the notion that feminism is now utterly irrelevant because all has been won for women.
Enlightened Sexism debunks this illusion and lays out how—from The Bachelor, Extreme Makeover, and Cosmo to Sex and the City and the sexist coverage of Hillary Clinton’s campaign—we got here. It also shows how these very different fantasies are targeted to older and younger women, mothers and daughters, and thus pit us against each other.
And it urges us to rip the veil off these fantasies, expose the gap between image and reality, and refuse to allow media illusions to insist that feminist politics are no longer relevant or needed.
COMING OUT MARCH 1, 2010