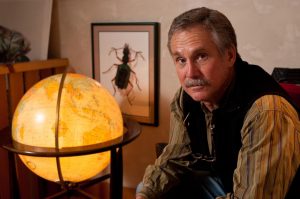 David has written many books, including two that many consider to be the definitive book on that subject: The Reluctant Mr. Darwin, about the father of evolutionary thought Charles Darwin, and Spillover, about emerging viral diseases.  He has also written hundreds of pieces for publications like Outside, Esquire, The Atlantic, Rolling Stone, and National Geographic; he is a three-time recipient of the National Magazine Award. He is a Contributing Writer for National Geographic Magazine, 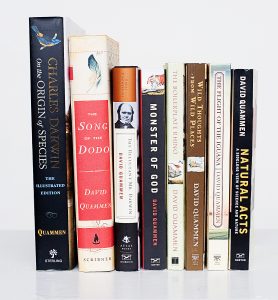 His newest book The Tangled Tree follows the groundbreaking work of microbiologist Carl Woese, who merely re-wrote our complete understanding of the so-called “Tree of Life” which is a way of charting and understanding evolutionary development from the first one-celled organisms to the billions of life forms now on the planet. Scientists have given this phenomenon Woese discovered some fancy names. One is horizontal gene transfer. Another, slightly more suggestive, is infective heredity. In some cases, these genes travel sideways—from creature to creature, even from species to species—by viral infection. That’s supposed to be impossible. Woese’s successors have shown that it’s not just possible—it’s widespread and vastly consequential.

The Wall Street Journal declared “David Quammen proves to be an immensely well-informed guide to a complex story. . . . Indeed he is, in my opinion, the best natural history writer currently working. Mr. Quammen’s books . . . consistently impress with their accuracy, energy and superb, evocative writing.”

He’s been a popular college speaker for many years. Comments about his visits include “He gave a wonderful lecture, full of compelling images, to complement the substance of his talk” (Claremont McKenna); “…the event was a huge success. David packed the auditorium and we had community come to our lecture who had never been on campus before! … he’s charming, witty and very interesting” (University of Nevada Reno); and “David is a wonderful guy, and everyone enjoyed his lecture and his other interactions with people during his visit.  Another winner – thank you!” (University of Wisconsin).

Let us know if you’d like to bring David to your organization, campus, or conference!