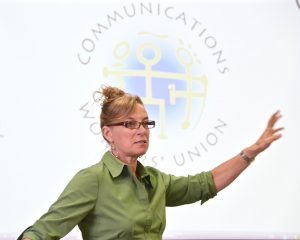 Jane McAlevey has spent most of her life as an organizer and negotiator. She’s fourth generation union, raised in an activist-union household. She spent the first half of her organizing life working in the community organizing and environmental justice movements and the second half in the union movement. She has led power structure analyses and strategic planning trainings for a wide range of union and community organizations and has had extensive involvement in globalization and global environmental issues.

Her first book, Raising Expectations (and Raising Hell), published by Verso Press, was named the “most valuable book of 2012” by The Nation Magazine. The book chronicles her years organizing with unions, which included her serving as Executive Director and Chief Negotiator for a union local, as National Deputy Director for Strategic Campaigns of the Healthcare Division for SEIU, and she was the Campaign Director of the one of the only successful multi-union, multi-year, geographic organizing campaigns for the national AFL-CIO. 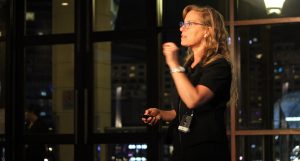 Her second book, No Shortcuts, Organizing for Power in the New Gilded Age was published by Oxford University Press. The book is the subject of numerous reviews and is generating considerable debate in and outside the labor movement in the USA and internationally. 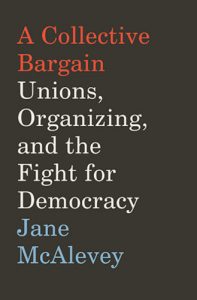 Her newest book, A Collective Bargain: Unions, Organizing, and the Fight for Democracy has been described thus by Publisher’s Weekly: “Labor activist McAlevey delivers a persuasive argument that the power of ‘strong, democratic’ trade unions can fix many of America’s social problems in this timely cri de coeur. . .  She offers a useful primer on how labor organizing works, and effectively refutes common assumptions about unions. . .  McAlevey’s . . .  humor and contagious confidence in the efficacy of organized labor give this succinct volume an outsize impact.” – Publishers Weekly (starred review)

Please contact us if you’d like more information on bringing Jane to speak to your organization, conference, or institution!