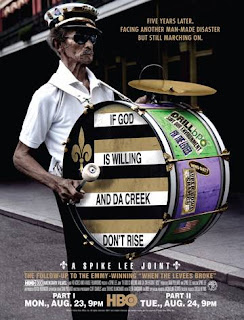 Five years after Hurricane Katrina, director Spike Lee returns to New Orleans to see how the ambitious plans to reinvent the Crescent City are playing out in IF GOD IS WILLING AND DA CREEK DON’T RISE. In an all new, four-hour documentary premiering on HBO, Lee finds a patchwork of hope and heartache in a story bookended by a pair of momentous events — the historic 2010 Super Bowl victory and the disastrous British Petroleum oil spill — that changed the history of America’s most unique city once again.

IF GOD IS WILLING AND DA CREEK DON’T RISE is a continuation of the story of the rebirth of the Big Easy as first recorded in Lee’s epic, Emmy® and Peabody award-winning 2006 documentary, When The Levees Broke: A Requiem In Four Acts. Alongside the city’s storied ability to celebrate life with unmatchable ebullience, Lee documents the successes and failures in the ongoing efforts to restore housing, healthcare, education, economic growth and law and order to a battered but unbowed community. The film will debut in two parts on MONDAY, AUG. 23 (9:00-11:00 p.m. ET/PT) and TUESDAY, AUG. 24 (9:00-11:00 p.m.).

“We knew when we finished the first film that the story wasn’t over,” says Lee. “It was clear it would take a long time for the city to get back on its feet.”

Lee and his crew arrived in New Orleans in Feb. 2010 during a new wave of optimism, led by the Who Dat Nation, the community of passionate fans of the NFL champion New Orleans Saints football team. “The mood in New Orleans was great when we got there,” Lee says. “They just won a Super Bowl. They had a new mayor and people’s spirits were high.”

New Orleanians were also encouraged by a series of legal victories that promised accountability for some of the devastating damage done to their homes by massive flooding during and after the storm. Notably, in November 2009, a federal district court ruled that the Army Corps of Engineers was culpably negligent for the failure of the levees in the face of rising tides, paving the way for long awaited financial restitution.

Amid the ambitious plans to reinvent the city, Lee also uncovered a deep undercurrent of mistrust. Many residents say that recovery efforts mask an effort to transform the city famous for letting the good times roll into an “economic engine” that will benefit only an elite few.

A lack of affordable housing is one of several serious ongoing problems faced by the city’s poor, especially the primarily African-American residents of the devastated Lower Ninth Ward and St. Bernard’s Parish. The four large public housing developments have been shuttered, and rents have soared, with the average fair-market value of an apartment rising from $578 in 2005 to $881 in 2009. Only 38 percent of the private homes destroyed in the hurricane have been rebuilt.

“Some parts of the city are rebuilt,” Lee notes. “But a lot of houses in those areas are in the same condition they were five years ago.”

In many cases, private efforts are stepping into the void. Significant advances are being made by nonprofit reconstruction efforts like Make It Right, spearheaded by actor Brad Pitt, who has committed to restoring homeowners by building affordable “green,” storm-resistant new homes in the Lower Ninth Ward.

New Orleanians have rebuilt their own homes, as well. Grammy®-winning musician Terence Blanchard, who was seen accompanying his elderly mother to her ruined residence in When The Levees Broke, returns for a tour of the now lovingly restored home, which his mother insisted be reconstructed exactly as it was, despite her son’s offer to update her original kitchen.

The same indomitable spirit shines in the stories of New Orleanians who have reinvented their own lives after facing tremendous losses. Kimberley Polk, seen in the previous film wracked with grief by the death of her young daughter, used that tragedy to propel herself through nursing school. Katherine Montana Gordon, who evacuated to Houston in 2005, remains in the city that welcomed so many after discovering an unexpected lifeline in the Houston school system, which provides specialized classes for her autistic son that were never available to him in New Orleans.

Some of the city’s plans have yielded mixed blessings for those they are supposed to serve. Plans to replace Charity Hospital, a mainstay that served the community’s poorest residents for 250 years, with a larger, more up-to-date facility could eventually provide improved healthcare for the community. But the project is mired in red tape and in the meantime, residents face a critical shortage of primary care physicians and mental health services.

An uptick in violent crime after Katrina has begun to normalize and ongoing efforts at accountability are yielding results. The FBI’s investigations into allegations of brutality and cover-ups in the New Orleans Police Department have resulted in indictments of current and former police officers in connection with incidents including the notorious unprovoked shooting on Danziger Bridge that killed an unarmed teenager and a severely mentally disabled man and wounded four others.

If God Is Willing And DA Creek Don’t Rise also visits Houston, where an estimated 150,000 New Orleans evacuees remain. The film looks at other areas along the Gulf, including Gulfport, La. and Biloxi, Miss., where rebuilding has progressed more quickly, at least partly due to what former Louisiana Governor Kathleen Babineaux Blanco says was an inequity in distribution of federal relief funds. She points out that Louisiana, which suffered 75 percent of the damage from the storm, received approximately the same number of federal dollars as Mississippi, which sustained only 23 percent of the damage.

Just as Lee believed filming was complete, tragedy struck the Gulf once more. On April 20, a deepwater offshore oil rig operated by British Petroleum exploded, unleashing torrents of oil into the Gulf, resulting in one of the biggest environmental disasters of all time. Lee and his crew immediately returned to assess the impact of this latest calamity and capture the reaction of area residents.

“The people of the Gulf Coast feel they’ve been victimized by greed – again,” says Lee. “The Army Corps cut corners and built the faulty levees. Oil companies and gas companies are jeopardizing the barrier islands and the wetlands. They too are trying to cut corners, and 11 people are dead because of it. The people want answers. They want their environment and their way of life to be saved.”

But even in the face of this recent catastrophe, the resilient strength of New Orleans and Gulf Coast residents remains intact, observes the filmmaker. “The story is not over yet,” Lee says. “I’m proud HBO has given me the opportunity to tell the stories of these great Americans and that people will see how strong their spirits are.”