Happy Wednesday! This week, we have a guest blogger -Neil deGrasse Tyson describes … 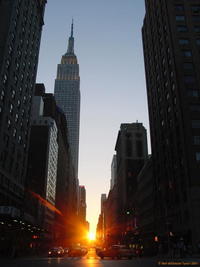 Sunset looking down 34th Street. One of two days when the sunset is exactly aligned with the grid of streets in Manhattan.

What will future civilizations think of Manhattan Island when they dig it up and find a carefully laid out network of streets and avenues? Surely the grid would be presumed to have astronomical significance, just as we have found for the pre-historic circle of large vertical rocks known as Stonehenge, in the Salisbury Plain of England. For Stonehenge, the special day is the summer solstice, when the Sun rises in perfect alignment with several of the stones, signaling the change of season.

For Manhattan, a place where evening matters more than morning, that special day comes twice a year, when the setting Sun aligns precisely with the Manhattan street grid, creating a radiant glow of light across Manhattan’s brick and steel canyons, simultaneously illuminating both the north and south sides of every cross street of the borough’s grid. A rare and beautiful sight. These two days happen to correspond with Memorial Day and Baseball’s All Star break. Future anthropologists might conclude that, via the Sun, the people who called themselves Americans worshiped War and Baseball.

For these two days, as the Sun sets on the grid, half the disk sits above and half below the horizon. My personal preference for photographs. But the day after also offers Manhattanhenge moments, but at sunset, you instead will find the entire ball of the Sun on the horizon.

Arrive a half-hour earlier than the times given below.

For best effect, position yourself as far east in Manhattan as possible. But ensure that when you look west across the avenues you can still see New Jersey. Clear cross streets include 14th, 23rd, 34th. 42nd, 57th, and several streets adjacent to them. The Empire State building and the Chrysler building render 34th street and 42nd streets especially striking vistas.

Unnoticed by many, the sunset point actually creeps day to day along the horizon: northward until the first day of summer, then returning southward until the first day of winter. In spite of what pop-culture tells you, the Sun rises due east and sets due west only twice per year. On the equinoxes: the first day of spring and of autumn. Every other day, the Sun rises and sets elsewhere on the horizon. Had Manhattan’s grid been perfectly aligned with the geographic north-south line, then the days of Manhattanhenge would coincide with the equinoxes. But Manhattan’s street grid is rotated 30 degrees east from geographic north, shifting the days of alignment elsewhere into the calendar.

Note that any city crossed by a rectangular grid can identify days where the setting Sun aligns with their streets. But a closer look at such cities around the world shows them to be less than ideal for this purpose. Beyond the grid you need a clear view to the horizon, as Manhattan has across the Hudson River to New Jersey. And tall buildings that line the streets create a vertical channel to frame the setting Sun, creating a striking photographic opportunity.

True, some municipalities have streets named for the Sun, like Sunrise Highway on Long Island and the Sunset Strip in Los Angeles. But these roads are not perfectly straight. And the few times a year when the Sun aligns with one of their stretches of road, all you get is stalled traffic solar glare temporarily blinds drivers.

So Manhattanhenge may just be a unique urban phenomenon in the world, if not the universe.

Note that several years ago, an article in the New York Times identified this annual event as the Manhattan Solstice. But of course, the word solstice translates from the Latin solstitium, meaning stopped sun, in reference to the winter and summer solstices where the Sun’s daily arc across the sky reaches its extreme southerly and northerly limits. Manhattanhenge comes about because the Sun’s arc has not yet reached these limits, and is on route to them, as we catch a brief glimpse of the setting Sun along the canyons of our narrow streets.

While we are on the subject, when viewed from all latitudes north of the Tropic of Cancer (23.5 degrees north latitude), the Sun always rises at an angle up and to the right, and sets and an angle down and to the right. That’s how you can spot a faked sunrise in a movie: it moves up and to the left. Filmmakers are not typically awake in the morning hours to film an actual sunrise, so they film a sunset instead, and then time-reverse it, thinking nobody will notice.