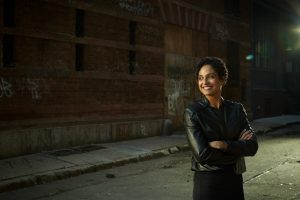 Shola was quite accomplished in a number of areas before becoming a filmmaker. For instance, she was a member of the Sesame Street cast as a child! As she got older, she also became a nationally-ranked track star in high school, which led to the track team at University of Texas.

She has produced and scripted stories that have aired on BET, CNN, ESPN, HBO Sports, TV One, and PBS.   The Sundance Institute selected Shola as one of five women  who show great promise to be mentored in their prestigious Women’s Filmmaker Initiative. Shola was also recently awarded a prestigious Creative Capital Award for her next film, a narrative on the great liberator Harriet Tubman.  She has been a member of the Documentary Jury of the Sundance Film Festival.

Her feature documentary FREE ANGELA & All Political Prisoners is a first hand account of the events that thrust Angela Davis into the national spotlight from a young college professor to a fugitive on the FBI’s Ten Most Wanted list. The film received critical acclaim and premiered at the Toronto International Film Festival and won the 2014 NAACP Image Award for Excellence for Best Documentary.

In 2013, She was named the Curator for Film, Moving Image and Recorded Sound at the Schomburg Center for Research in Black Culture. Shola holds a Master’s in American History and Public History Management from the University of California, Riverside as well as a graduate degree in journalism from Columbia University. She is also working on a book based on her film Free Angela.

Be sure to contact us for more information about hosting Shola at your event! Write to us at inquiries@jodisolomonspeakers.com