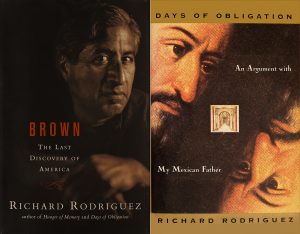 “Once upon a time, I was a ‘socially disadvantaged’ child. An enchantedly happy child. Mine was a childhood of intense family closeness. And extreme public alienation.” – Richard Rodriguez, Hunger of Memory

Rodriguez was born to Mexican immigrant parents in San Francisco, and spoke only Spanish until he began school. From these humble beginnings, he would go on to earn his bachelor’s degree from Stanford, a master’s from Columbia University, and further post-graduate study at Berkeley and London’s Warburg Institute (the latter on a Fulbright scholarship).

His mastery of language is evidenced in his written and spoken work. His first book, Hunger of Memory: The Education of Richard Rodriguez, was an account of his early education and assimilation into American society … and the costs that came with it.

While it was critically acclaimed and won awards for its compelling prose, the book was also controversial in many people’s eyes, as Rodriguez questioned the value of bilingual education and affirmative action.  Regardless of its controversy, it remains a frequently read and assigned book in universities around the country.

“The boy who first entered a classroom barely able to speak English, twenty years later concluded his studies in the stately quiet of the reading room in the British Museum. Thus with one sentence I can summarize my academic career. It will be harder to summarize what sort of life connects the boy to the man.” Hunger of Memory

Instead of pursuing an academic career, Rodriguez blazed a trail as a public intellectual, writing essays in leading publications like Harpers, TIME, and Mother Jones, and earned further national attention as a frequent video essayist on The New Hour with Jim Lehrer. The latter earned him a prestigious Peabody Award.

He has explored the meaning of race in American culture in his book Brown: The Last Discovery of America, and considered the meaning of the desert in the writings of Judaism, Islam and Christianity, the world’s three great monotheistic religions in Darling: A Spiritual Autobiography.

“At the dawn of a worldwide religious war that Americans prefer to name a war against terror, I feel myself drawn to Islam, drawn to read the Koran, even to kiss the Koran—melodramatically, but sincerely—as I did one evening recently in front of a university audience. I meant to honor Islam. I meant to convey that, as a Christian, I consider myself a loving brother to the Muslim, as I am to the Jew, by the favor of Father Abraham.” Darling

Let us know if you’d like to bring Richard Rodriguez to speak to your organization, campus, or conference!